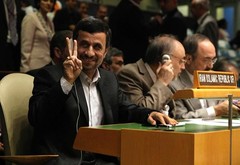 Dr. Katherine Albrecht, author of the best-selling book SPYCHIPS and host of a daily radio show, pointed out on a recent program that the United Nations has completely erased all traces of Iran President Mahmood Ahmadinejad’s September 26, 2012 speech to the United Nations General Assembly.

Albrecht, who happened to be in New York City on business the day that Ahmadinjad gave his speech, was discussing related issues on her November 28th show and tried to post a link to the Iran President’s speech in her archives. That is when she found that it had been inexplicably scrapped- memory holed- and no longer existed anywhere, except from reposts on a few obscure websites. The transcript of the speech had originally been posted on the U.N. site, but the links now result in a ‘PAGE NOT FOUND’ message.