Tests have revealed that magma is bubbling higher than usual in Mount Tongariro, which means further eruptions are more likely.

A series of samples have been tested since the volcano’s Te Mari crater erupted on Monday night, but the latest results give the greatest insight.

“We’re now convinced that the likelihood of this just being a one-off has decreased,” GNS vulcanologist Nico Fournier said.

“But it doesn’t mean it’s just about to blow and go pear-shape.”

The results detected sulphur dioxide and carbon dioxide in the steam plume, which indicated that magma was closer to the surface than it usually was, Fournier said.

It was unclear how high the magma was – it could be anything from meters to kilometers, Fournier said.

If a magmatic eruption did occur then it wouldn’t necessarily be significant, he said. It could result in a lava flow or it could lead to a series of explosions.

It was also likely that Monday night’s eruption could be followed by a series of steam eruptions, or no activity at all, Fournier said.

Civil Defense, along with a number of other organizations including the Department of Conservation, would continue to monitor the volcano’s activity.

There was no new advice or warnings that stemmed from the latest development, a Civil Defence spokesman said.

There was about 2100 tonnes of sulfur dioxide being emitted from the volcano per day.

That was above average and the highest sulfur dioxide emission rate for any New Zealand volcano, however it wasn’t unexpected considering the amount of steam and gas which was being emitted, a GNS spokesperson said.

Scientists would also be obtaining gas and water samples from the nearby Ketetahi hot springs and some of the rocks which were ejected from the crater and which damaged the Ketetahi hut.

The volcano was still ejecting steam and gas this morning while tremors continued to shake the earth below it, Fournier said.

Meanwhile, a 4.7 magnitude earthquake in the Bay of Plenty this morning has had no impact on White Island, which erupted on Tuesday night.

It was the first eruption in 12 years for the country’s most active and largest cone.

White Island tended to have volcanic episodes which lasted a few months to a few years, so this could just be the start of more to come, Rosenberg said.

Wellington, Aug. 10 (Xinhua-ANI): A floating mass of the volcanic rock, pumice, reportedly covering 25,000 square km, has been found floating in the South Pacific, indicating a third volcano is active near New Zealand.

The Orion relayed the information to New Zealand navy vessel HMNZS Canterbury, which spotted the pumice late Thursday about 85 nautical miles west southwest of Raoul Island, one of the Kermadec Islands that lie 750 to 1,000 km northeast of New Zealand.

Lieutenant Tim Oscar, a Royal Australian Navy officer on exchange with the Royal New Zealand Navy, described the pumice as “the weirdest thing I’ve seen in 18 years at sea.”

“The lookout reported a shadow on the ocean ahead of us so I ordered the ship’s spotlight to be trained on the area,” Oscar said in the NZDF statement.

“As far ahead as I could observe was a raft of pumice moving up and down with the swell,” he said.

“The rock looked to be sitting 2 feet (60 cm) above the surface of the waves, and lit up a brilliant white color in the spotlight. It looked exactly like the edge of an ice shelf.”

Oscar said he had been briefed by a volcanologist from New Zealand’s Institute of Geological and Nuclear Science (GNS Science) the previous day when the ship encountered another area of pumice from an undersea volcano.

“I knew the pumice was lightweight and posed no danger to the ship. Nonetheless it was quite daunting to be moving toward it at 14 knots. It took about three to four minutes to travel through the raft of pumice and as predicted there was no damage,” he said.

“As we moved through the raft of pumice we used the spotlights to try and find the edge – but it extended as far as we could see. “

HMNZS Canterbury was en route to Raoul Island with a party of GNS scientists aboard at the time.

The Commanding Officer, Commander Sean Stewart, changed course to intercept the pumice and retrieve samples, which would be analyzed to determine which volcano they came from, said the statement.

According to GNS Science, the underwater volcano, Monowai, had been active along the Kermadec Arc and the pumice could be a result of that activity, said the NZDF statement.

The find comes after eruptions from Mount Tongariro, in New Zealand’s central North Island, late Monday and White Island, a marine volcano about 50 km off the east of the North Island, two days later.

The GNS scientists aboard the Canterbury believed the volcanic activity of Tongariro, White Island and along the Kermadec arc was unrelated, said the NZDF statement. (Xinhua-ANI)

Santorini\’s “tremor” waking up as usual…

Tongariro volcano has remained calm. GNS scientists measured elevated levels of SO2 and other volcanic gasses, which suggests that magma is accumulating beneath the volcano.
It is possible, that the Aug 6 eruption was only a precursor to a pending magmatic eruption, which could even be large, if the size of initial phreatic activity is in proportion to the proper magmatic eruption.

Other updates from the rest of the world include the usual candidates who have not shown much new or surprising activity:

Popocatépetl in Mexico: During the past 24 hours, 17 weak explosions occurred, and a constant steam and gas plume is rising. Glow is visible at night.

Fuego volcano: The lava flow towards Barranca Taniluya is active and reaches 200 meters length, producing small avalanches. 3 explosions were counted by the observatory yesterday and reached heights around 400 m.

Santiaguito / Santa Maria (Guatemala) produced a hot lahar yesterday at 21:50 h local time which drained large amounts of volcanic material and blocks. It lasted 15 minutes during which the windows of the observatory were vibrating.

Nevado del Ruiz (Colombia) produces a significant plume of SO2.

Tungurahua volcano: The volcano has moderately strong seismic activity with phases of tremor frequently visible, related to fluid movements. No reports of recent explosions. Direct observations have been difficult due to bad weather.

El Hierro volcano: slightly increased number of quakes during the past days, including a shallow (3 km) M2.4 event on 8 Aug in the central part of the island.

A slightly increased tremor is visible at Stromboli in the Eolian island today suggesting that activity is higher today.
At nearby Etna, tremor continues to be low and glow at night is currently not visible from Bocca Nuova, suggesting that explosions, if any, are weak.

In Iceland, Askja volcano has been showing increased signs of unrest including higher than background levels of tremor, as Diana Barnes remarked on VolcanoCafe.

A comment on rumors about elevated tremor on Santorini volcano was posted as well. It is interesting to note that “tremor” usually starts in the morning and ends at night.

Death toll in Mexico from storm Ernesto rises to six 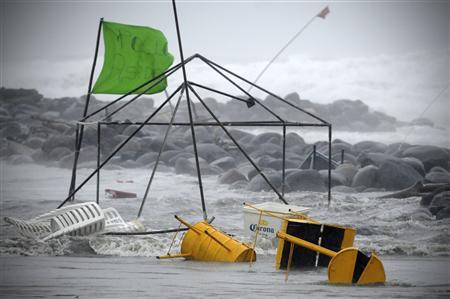 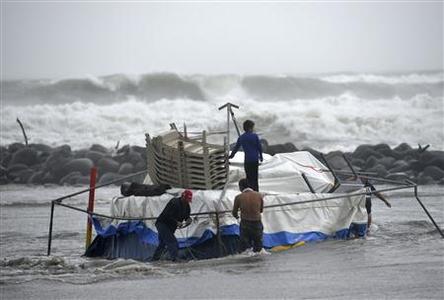 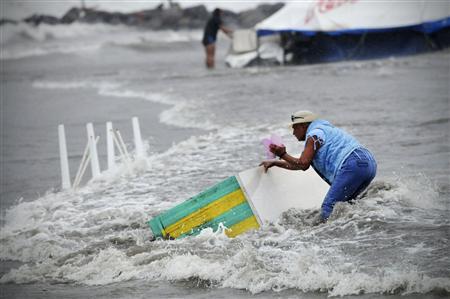 (Reuters) – The death toll attributed to the storm Ernesto rose to six on Friday although it continued to weaken as it passed through Mexico’s eastern Veracruz state.

Three members of one family were killed on Thursday night when a tree fell on their pick-up truck about 60 miles southwest of Veracruz city, according to a state civil protection official. A fourth family member, a six-year-old child, was also injured in the accident.

Ernesto is blamed for causing torrential rains and flooding in nearby rivers.

According to local officials, three other people died earlier on Thursday — one in Coatzacoalcos, Veracruz, after falling while working on home repairs; and two more who drowned in next-door Tabasco state.

Three major oil-exporting ports in the Gulf of Mexico were re-opened on Friday morning as the storm no longer posed a risk to ships leaving installations in Coatzacoalcos, Cayo Arcas and Dos Bocas, which ship most of Mexico’s crude oil exports.

Flooding could damage agriculture in southern Veracruz, a major corn producing area, according to Federico Assaleih, president of the state’s agriculture council.

“We have received reports that some (corn) plantations were flooded yesterday,” said Assaleih, but he added that the extent of crop damage would not be known for several days.

Ernesto, which the U.S. National Hurricane Center said dissipated on Friday morning, made landfall on Mexico’s Yucatan coast late on Tuesday as a Category 1 hurricane.

A rare summer storm blasted the Arctic this week, beginning off the coast of Alaska, and moving over much of the Arctic Sea for several days before dissipating.

Although the storm itself was uncommon — NASA’s Goddard Space Flight Center in Greenbelt, Md., estimates that there have only been about eight similarly strong August storms in the last 34 years — the real news behind the meteorological event is the stunning Aug. 6 photo taken by the Moderate Resolution Imaging Spectroradiometer (MODIS) on NASA’s Aqua satellite. The cyclone is spinning toward the North Pole, with Greenland visible in the bottom-left of the image. Scientists are left speculating what the impact of such a storm could be.

Arctic storms such as this one can have a large impact on the sea ice, causing it to melt rapidly through many mechanisms, such as tearing off large swaths of ice and pushing them to warmer sites, churning the ice and making it slushier, or lifting warmer waters from the depths of the Arctic Ocean.

“It seems that this storm has detached a large chunk of ice from the main sea ice pack. This could lead to a more serious decay of the summertime ice cover than would have been the case otherwise, even perhaps leading to a new Arctic sea ice minimum,” said Claire Parkinson, a climate scientist with NASA Goddard. “Decades ago, a storm of the same magnitude would have been less likely to have as large an impact on the sea ice, because at that time the ice cover was thicker and more expansive.”

More information on the abnormal Arctic weather this summer can be found here, courtesy of the National Snow and Ice Data Center.

Published on Aug 10, 2012 by Suspicious0bservers

REPEAT LINKS
Spaceweather: http://spaceweather.com/ [Look on the left at the X-ray Flux and Solar Wind Speed/Density]

HAARP: http://www.haarp.alaska.edu/haarp/data.html [Click online data, and have a little fun]

SDO: http://sdo.gsfc.nasa.gov/data/ [Place to find Solar Images and Videos – as seen from earth]

SOHO: http://sohodata.nascom.nasa.gov/cgi-bin/soho_movie_theater [SOHO; Lasco and EIT – as seen from earth]

Stereo: http://stereo.gsfc.nasa.gov/cgi-bin/images [Stereo; Cor, EUVI, HI – as seen from the side]

RSOE: http://hisz.rsoe.hu/alertmap/index2.php [That cool alert map I use]

Gamma Ray Bursts: http://grb.sonoma.edu/ [Really? You can’t figure out what this one is for?]

It might look like a scene from a horror film but this is the breathtaking natural phenomenon which has met tourists at a popular French beauty spot.

The stunning scenes in Camargue, southern France, may look very dramatic but are actually thought to be caused by the high levels of salt within the water.

The bizarre sight was captured by photographer, Sam Dobson, from Moscow in Russia.

The natural phenomenon, which has seen salt levels turn water red,  has had a breathtakingly beautiful – and eerie –  effect on wildlife

One thought on “Warning of massive Earthquake and Tsunami to hit Australia and California.v2 scientific info update”