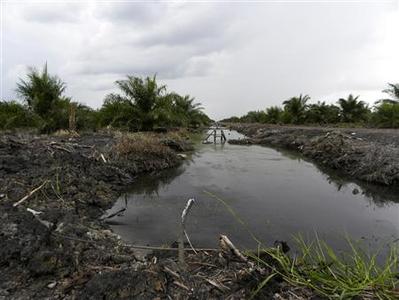 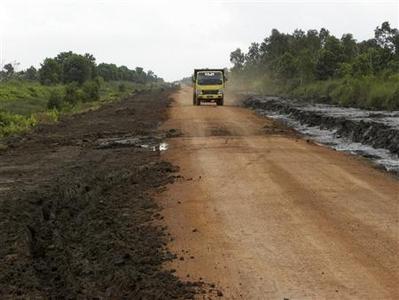 (Reuters) – An Indonesian palm oil firm received preliminary approval six years ago for a large plantation in a swampy, forested corner of Borneo island, bringing the promise of jobs and roads to impoverished villages.

By the book, that would have marked the start of a lengthy licensing and environmental approvals process before clearing and planting could start.

PT SCP is now under investigation from a presidential taskforce on forests and land reform as well as local police for clearing and developing the concession before getting mandatory environmental approvals. The investigation has become a test of Indonesia’s pledge to clamp down on illegal forest clearing and pull plantation and mining firms into line.

“The allegation of illegal deforestation is deeply disturbing and should be addressed by PT Best quickly and transparently,” major customer Bunge, a global agribusiness and food company, said in an email to Reuters. “If proven true, Bunge will take appropriate steps to ensure that our supply chain reflects our principles.”

Further examination by Reuters of official documents, interviews and satellite images reveals how the 23,000-hectare (57,500 acre) concession in Central Kalimantan province was developed and cleared apparently in violation of multiple laws.

“PT SCP is suspected to have committed violations to the concession area since three years ago at the very least,” said Kuntoro Mangkusubroto, one of Indonesia’s most respected officials and head of the presidential taskforce on forests and land reform.

The allegations are being investigated by the taskforce and police in Central Kalimantan, a province in the Indonesian portion of Borneo, a vast island east of Singapore with an interior of dense tropical rainforest. If found guilty, PT SCP directors could be jailed and the concession’s license revoked.

Villagers are also waging a campaign against PT SCP for compensation and loss of livelihoods, saying the firm never properly consulted them about the plantation plan.

Officials at PT SCP and PT Best deny wrongdoing and point to conflicting national and local laws in the area and say fair compensation was offered.

“In the past, even the devil didn’t want to enter this area,” Dharta said, referring to the concession.

President Susilo Bambang Yudhoyono has set a goal of cutting greenhouse gas emissions by saving Indonesia’s dwindling rainforests, a pledge that won the promise of $1 billion from Norway should he succeed. Indonesia has the world’s third-largest area of tropical rainforest.

But Yudhoyono faces huge pressure because of soaring global demand for palm oil, used in everything from cookies to lipstick to biofuels, and the government plans to double current output to 40 million metric tons (44.1 million tons) a year. Indonesia is the world’s top palm oil producer and earns $20 billion a year from exporting the edible oil.

A recent trip to PT SCP’s concession in Pulang Pisau district in Central Kalimantan showed how advanced the plantation is.

Criss-crossing the plantation along roads laid out in a grid-pattern, deep canals drain tea-colored water from the black peat soil where forests stood a few years ago. The deep peat stores large amounts of carbon, which when drained or burned is released into the air, stoking climate change.

At the northwest edge of the plantation, a canal marks the boundary with thick forest on one side where several endangered orang-utans were gathered before fleeing at the sight of people. A GPS tracking device confirmed the area was part of PT SCP’s concession area.

EIA’s report details eight suspected violations against Indonesian law committed by PT SCP. The report cites the laws and includes copies of official documents supporting its findings. “This is a test case that will show us very clearly if the government is able or willing to enforce the law,” said Tomasz Johnson, a forest campaigner for EIA who investigated the company.

ALL IN THE TIMING

At the heart of the issue is PT SCP’s development of the plantation without getting approval for its environmental impact assessment report. The firm has also planted in deep peat, data used by the Ministry of Forestry shows. A presidential decree bans planting in peat more than 3 meters deep.

Indonesian law states that plantation and mining firms need an approved environmental impact assessment before carrying out any business or activities. Failure to comply can result in up to three years in jail and 3 billion rupiah ($318,000) in fines.

PT SCP official Dharta said an environmental impact assessment report had been done but not approved by provincial authorities. A senior company official from PT Best, who declined to be named, told Reuters the firm would try to get the environmental assessment approved in one or two months.

The key to the issue is the timing.

Indonesia’s complex permitting process for a plantation can take up to three years, meaning the firm was obliged to wait until receiving its major environmental and business approvals.

Satellite imagery analysis by Thomson Reuters subsidiary Lanworth, which specializes in agriculture, forestry and renewable energy, shows the concession area being cleared from 2006, when the firm had only received a preliminary approval that did not give it the right to clear land.

It shows that before the clearing of PT SCP’s concession, forest cover was 17,600 hectares in 2004-05, or 75 percent of the total. By late 2011, just over 2,100 ha of forest and other vegetation was left. Large areas of clearing started in September-November 2006 and continued into 2009, the analysis shows.

The firm also never received a forest clearance permit from the Ministry of Forestry. Dharta told Reuters this was because of confusion over the application of national and regional laws.

“We are actually the victim here. There is uncertainty in the law where this area should go to,” he said.

A 2011 Ministry of Forestry decree shows the concession area as a combination of production, protection and conservation forest, meaning it has not been released for development.

Local officials and the company say a provincial bylaw removes the obligation for firms to get Ministry of Forestry approval to clear forest for a palm oil plantation, a view the ministry disputes.

Presidential adviser Mangkusubroto told Reuters his team was investigating evidence PT SCP had also extended the plantation beyond its boundaries.

Local landowner Haji Asmadi, a thin, energetic man of 60, says villagers were never properly consulted on plans to develop the plantation, a view disputed by PT SCP and PT Best. He is leading a claim for compensation for about 5,600 hectares of land within the concession.

Indonesian shipping records obtained by Reuters show that PT Best has been expanding its reach slowly.

Last year, Bunge accounted for a third of the more than 50,000 tonnes of palm oil cargoes shipped from PT Best in Belawan port in Sumatra, the main export hub for the commodity.

Cargill confirmed a single purchase of palm oil products from PT Best in September 2011 and said it would halt purchases from the firm if any illegality was proven.